Home: an apartment in Vexian City

Occupation: Waitress at the Maid Cafe in Vexian City, also works at the daycare to spend time with the kids

Likes: Hanging around with Mimi, Lemony, and Sara at the mall, fruit, make up, her job, messing with Wing, flirting with Dark Ace (try's to), helping others in need

Dislikes: Thunder Punch shocking her, Dark Ace turning her down, getting a bad hair cut, people sunning her due to her freakish strength, Mimi giving up on Thunder Punch, seeing her friends in danger

The Wolf Fang tribe was fierce k9 warriors who pillaged lands for recourses until their leader was killed by a fellow warrior who wanted to change their tribe's path. He was a dog named Kniner Pack. During his rule he created a Nation and made it Vexia's first democratic country. This is the only tribe in Vexia to have great success without a monster gem.

She has pink hair and her fur is a light peach color. She has two pigtails and long hair. She has blue color with a heart on it on her neck and her hands and pigtails have a yellow ring on them. She also wears a purple striped sweater and blue shorts. Her boys are pink and blue and have a red heart on the tip of them.

Famous sayings: I’m so not there :)

Personality:She is very energetic and goes against challenges head on! She loves flirting with Thunder Punch and the guys and happens to love messing with Sara (before she passed away). She hangs out (or at least tries) with Dark Ace because she secretly likes him.

When Hana was born she was extreamly frail and was told she wouldn't live to her first birthday. Her parents were overcome with sorrow until her father started to do monster gem resurch. He concluded that if he could get a monster gem she could be saved by the monster's power, but she may be cursed all her life (monsters of the gems don't like Vexians or Vumians so it would cost a user big time inorder to same a life). Her father was able to find the purple monster gem, which was thought to have disappeared with its oringonal tribe, the Edchidnas. He used monster known as parivius (the plasma monster) to give his daughter life. She became healthy in a few days and became a knormal girl. However when she hit the age of 5 things changed, the started to gain weight and sleep a lot. Her mother her though it could be the monster's long awaited cures to kick in. On her 6th birthday she was bed ridden and was ingulf end in a purple cocoon, the next day she was slim again, pretty again, and back to "normal". However she wasn't truly normal, she had gained a massive scale of super strength! She couldn't even pick up a fork without snapping it in half! It took her years of training with the Power MasivBeasts tribe (this tribe include rhinos, elephants, buffalo, wildabeasts, and hippo species) to control her powers. There she meet a young warrior named Rodney Rhino, he was strong but not that smart. When her training was compleat he asked her that one day that she would take him to the city where she lived. He said yes, however that dream never came to pass since Rodney was chosen as the new earth master monster gem guardian. They kept in tack and even formed a group when Dr. Eco started his world domination.

Due to Hanna being infused with monster gem energy when she was little she now has supper strength. She can lift up at least 19 tons! She has great hearing due to her lineage and she is able to hear things a mile away and has one of the greatest noses in Vexia

Hanna is very smart in tactical battles and when Vexia was in a war with the Ecomori Empire (Dr. Eco's mechanic mutant army) her leader ship helped the Vexian monstrosity force (Jacob, Rodney, Mia, and Wing). She is an excellent leader who has enough wits and power to back up her statements and plans.

Hanna is afraid of spiders and snakes which makes her really creeped out when they fight D. Eco or go to the Crepeymonstora Tribe 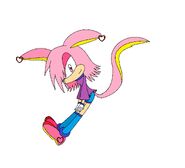 Hanna the Dog request by Paws-the-Wolf
Add a photo to this gallery
Retrieved from "https://vexian-encyclopedia.fandom.com/wiki/Hanna_Maxwell_the_Dog?oldid=4197"
Community content is available under CC-BY-SA unless otherwise noted.