Oh give it up, You and the world shall be mine to play with for all eternity "Inari"

Occupation: None, Used to be Queen of the Eastern World

Home: born in Shiluria but has no real home anymore

Romantic Interests: Want's Thunder Punch's genes, used to be in a relationship with Narcro before she became a demon

Likes: Thunder Punch's power and genes, When Thunder Punch falls into the darkness, Fire burning buildings and people, Death, Being a Queen again over the Eastern Continents and territories, Flirting, "Having close physical relationships if you know what I mean", She loves to drinking blood (even though she isn't a vampire she needs it to maintain her overall power and to make sure it is kept low)

Inari has red fur and grey tail tips and bandages that cover her feet. She has a green dragon eye amulet that suppresses her demonic powers. Her dress is black with green arm tips. She has one tail but gains all nine when she obtains a monster gem.

She loves power and powerful people. She want's to rule over the world with a family of strong and ruthless offspring which will keep the world in check. This is why she wants to find a man to seduce to make him her slave. She is ruthless and merciful and would kill a whole village just because she is bored. When she was queen she loved to collect harems to have he way with or to devour. She is also one of the few Vexians than can still eat Vexian flesh.

Inari was raised as a young maiden as a child. Her father established a new Kingdom Shiluria in the eastern Continent of Asiria in Vexia during the Great Tribal Warz 2000 years ago. They held two master gems (the fire and water gems) in their walls and three small gems (the diamond, gold, and emerald gems) within their walls during this time. Inari was a good child until her mother died due to an assassination attempt. This lead her father to grow a cold and evil heart. When she turned 14 her father married a western fox and she and her son moved into the palace. Her step-mother was abusive and nasty towards her but her new brother was nice and a true gentleman. When Inari was at the age of 16 she was told to marry in order to takeover the thrown from here now now (deceased) father. She declined to marry a random solder so her step-mother banished her from the royal family and took control telling lies that she was chosen to be Queen fro her husband. Inari lived in the ghettos of her kingdom and was abused or beaten by random angry subjects. One day she came in contact with a black and white orb in the outskirts of the city. The power over took her and she fell into madness. Her hatred fulled her and her thirst for power was scary. She returned to the palace as a monstrous nine tailed fox demon and murdered her step-mother,  her followers, and the whole country side which held over 2 million people. She then took the title of Queen and ruled over her kingdom with an iron fist. Many people died under her rule of 2 years and she caused massive starvation and plagues. She took control of all eastern Vexia and wanted to rule the war. She was at war with the Dark Echidnas when her step-brother came back to the palace with a dragon to defeat his step-sister. In the end he couldn't kill her so he shackled her up with demonic restraints and anti-monster gem energy orbs. To seal away all her power he carved out the eye of his dragon to make a necklace that would seal away any demonic or monster gem like energy/power. He created a chamber underneath the palace to seal her away for all eternity...until now

Back when Dr. Eco took over many lands he set his sites on the Kingdom of Shiluria. His plans were thwarted due to the green menace Dark Ace who was following the Dr at the time. In the end Dr. Eco held the capital hostage and Dark Ace called for Thunder Punch's help to free the Kingdom. Dark Ace fought the Dr in the palace room and Thunder Punch was able to save the people. However Dr Eco and Dark Ace's fight got out of hand then Dark Ace accidentally destroyed a wall opening what the people call the chamber of demons. Dark Ace went inside and found a skeletal remains of a vexian. Dr. Eco followed him in there and shot at Dark Ace and missed casing him to pull away a necklaces around the body. A bright red light filled the palace and a large Nine Tails demon surrounded the palace. Dark Ace went into his super form but couldn't defeat the creature. So he gave his last bit of energy to T.P causing him to go into nine tails Thunder Punch. T.P was able to defeat the beast but as soon as it appeared it vanished and in it's place was a female fox with 9 tails. She blew T.P a kiss and vanished into dust leaving no trace....Inari was finally free that fateful day.

Inari is known as "The Children of Kron" which are the most powerful monster gem users in history. Only corrupted vexians controlled by Kron's powerful gem can obtain this title. Since she is this she has the ability control non monster gem elements which only Kron can use. Her specialty is a technique called "mind fog" which can causes mental trauma to victims by burning their thoughts, memories, and personality and leaving then as a emotionless husk. She can only do this when her dragon necklaces is off. She controls the element fire and can use it to burn everything to ash (her abilities rival Fire Arm's guardian abilities). Once she has obtained 9 gems she will unleash her full power and unlock all of her tails. When this happens she can turn into a nine tails demon and cause chaos throughout the land.

She is the weakest out of all the known Vexians classified as Kron's Children so her pure monster energy powers are depleted very fast and she will have to use her already born elemental powers such as fire and diamond. She is very vulnerable to dragon attacks and dragon elemental powers. She is mentally unstable and will react rash towards family remarks or to her appeals to men with power. She also will ignore all events happening around her when she is torturing or trying to seduce her victims.

Narcro the Echidna (sometimes but mostly uses him)

Freddy The Hedgehog (only helps her for money)

She is obsessed with Thunder Punch's amount of power. When she was awakened as was defeated by the mongoose she fell for the love of his power and she melts just thinking about making him her King. Thunder Punch hates her and is very quick to fight her since she gives no regards towards life. Thunder Punch's nine tails form sends her chills and her plan is to have offspring with him so her children can takeover the world. She is very persistent when he is in the eastern territories of Vexia. She will uses captives to draw him out and will kill innocent people to make him corporate. Thunder Punch hates her will jump at the chance to stop her and to giver her a good punch! 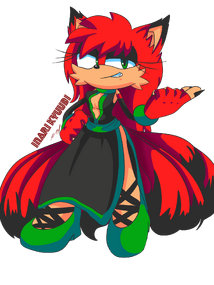 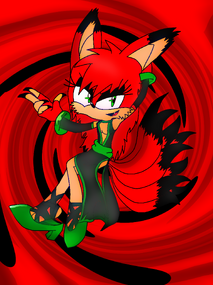 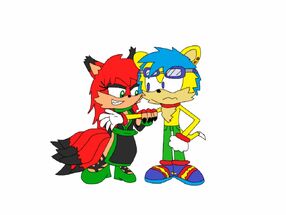 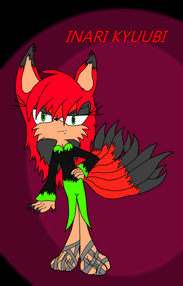 Add a photo to this gallery

Retrieved from "https://vexian-encyclopedia.fandom.com/wiki/Inari_Kyuubi_the_Fox?oldid=4220"
Community content is available under CC-BY-SA unless otherwise noted.