Mimi wears a blue heart shaped top and blue sleaves attaced that have a pourple stripe on it. She has blue short shorts with blue stockings. She has pink vilet hair with violet eyes. She has cyan colord boots that arelight blue in the front. She also has her trade cyan gloves. She has pourple rings in her ankels too.

Personality: She is head strong and cocky at times but she never gives up hope.

Mimi was born from a water hedgehog mother and a metal hedgehog father. She was subjected to a lot of teasing as a child due to her hair color and her being a hybrid. Her mother took it upon herself to leave the tribe and create a new home in Vexian city. Mimi's father didn't like the idea of leaving his tribe so he stayed in the metal hedgehog territory. Mimi grew up without her father and now has grown a grudge against tribal Vexians who still believe in the old ways of tradition. She was at the age of 13 when Vexian city was attacked by Dr. Eco and his robotic army. When fleeing from the disaster her mother and her was separated she stared death in the eyes. Then, all of a sudden she was picked up and was taken on top of a hill. At that time she first met Thunder Punch with Blue Jay and Fire Arm . "Stay here and try not to get that pretty face hurt for me", said Thunder Punch at her. At that moment she vowed she would marry that boy. Then whoosh, he was gone! He and the gang stopped the Dr. and set Vexian city back to itself. When her life was back to normal she would leave home and go off to find Thunder Punch. T.P who thinks this as annoying would leave when he saw her and thus started the chase.

Mimi carries mercury darts that she throws at here enemies. She can create water orbs with metal shards in them and throws them at her enemies. She has two forms. She turns pure mercury in her metal form and can turn parts of her body into metal weapons. In her water form, her hair is blue and she can turn her body in to water.

Sonic the hedgehog (other Dimension)

Cream the rabbit (other Dimension)

Blaze the cat (other Dimension)

Shadow the hedgehog (other Dimension) 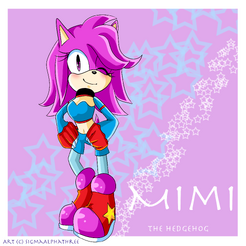 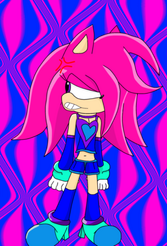 Mimi is Ticked! Watch out! 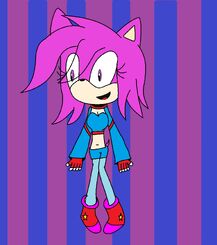 Retrieved from "https://vexian-encyclopedia.fandom.com/wiki/Mimi_the_Hedgehog?oldid=4201"
Community content is available under CC-BY-SA unless otherwise noted.