Narcro hates all other tribes. He is very prideful to his tribe and will not tolerated other species. Narcro is sly and cheerful, he rather trick his foes that to battle head on. He believes that there is no such thing as a fair fight and will easily attack children, women and the elderly. Narcro especially hates Dark Storm and Ebony for personal reasons. He is mentally insane and will brutally attack people with a smile on his face. 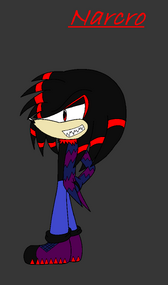 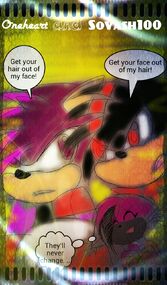 Narcro and Dark Storm's family portrait by Oneheart!
Add a photo to this gallery

Retrieved from "https://vexian-encyclopedia.fandom.com/wiki/Narcro_Darkenson_the_Echidna?oldid=4204"
Community content is available under CC-BY-SA unless otherwise noted.