Weapon: Will use his special baseball bat if needed

Dosent know who they are. He was raised by Massive Land Walker monks (the elephants of his tribe)

Rodney is an orange rhinoceros with a grey horn. He has brown hair and wears a striped bandanna on his head. Rodney has a grey and blue sweat jacket and grey gym pants. His shoes are red sandals and he wears two blue rings around his hands and has blue squares on his jacket. Those rings and squares are buffers to Rodney's massive amount of unused and controllable strength. He also looks scrawny for being one of the strongest in his tribe.

Rodney isn't the smartest of the gang and is very rash. He is thick headed and wont back down from a fight. He is also very kinfd and will spend alot of his time helping and volentering at schools to teach and play with little kids. He only becomes angry if a true friend is in danger or if someone hurts a little kid. In all Rodney is a big softy with a big punch

Rodney is a member of one of the largest and most peaceful tribes in the southern territories in Vexia. They consists of many African animals but their 5 leading clan species are elephants, rhinos, wildebeests and giraffes, and gorillas. They keep peace within their territorial range and even though they may be the biggest and strongest of all the Vexian tribes they are the nicest and most gentle of all. They obtained the earth master gem by accident and the power of the gem surrounded their capital in a huge wall called the Mayabu Wall. Their gem keeps their region in balanced and each generation a new guardian is chosen out of the 5 clans to guard it from other greedy clans or tribal attacks.

Rodney is really strong! He can deliver devastating blows if hitten and can easily take out tanks. Rodney is also a guardian making him a very powerful monster gem user. Rodney can summon the Earth elemental spirit to assist him or send minion rock lizards of the spirit to attack others. Rodney's skin is rock hard making any hand pistols useless (but larger and real guns will kill him). Rodney is resistant to many elements and can take a foe head on. Rodney isn't very fast but when he charges he can reach speeds of 50 miles per hour! Rodney's horn is strong as the earth's crust itself and can be used as a weapon too.

Rodney may be built like a tank but isn't invulnerable. Rodney is weak against ice and metal elemental powers and can't adapt to different types so style of fighting. Rodney isn't very smart which makes him a sitting duck most of the time. Just like Fire Arm Rodney's master gem powers are short and can't control the earth master gem spirit well too.

Knuckles the echidna (other Dimension) 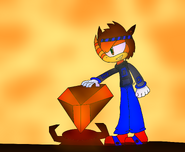 Rodney with the Earth Master Gem

Rodney's Profile pic
Add a photo to this gallery
Retrieved from "https://vexian-encyclopedia.fandom.com/wiki/Rodney_the_Rhino?oldid=4249"
Community content is available under CC-BY-SA unless otherwise noted.