I'll be even stronger than dad one day!  "Theroy Punch"

Species: Mostly mongoose and Leopard (Other species are fox and Tiger.)/ Vexian-Mobian hybird

Fur Color: Orange-yellow with tips of Blue and Black

Attire: Theroy wears a red and grey scarf and grey pants. He has two red gauges in his right ear.

Dislikes: Being left out, jerks, being teased about being a hybrid, sour candy, being alone.

Theroy is alot like his father. He is dull minded at times and his kind heart can be taken advantage of. He stands for whats right and looks up to his father's legacy. He is very protective over his sister and mother and will easily stand by his fathers side to fight if needed. Theroy is kind and is very helpful in the house. He shows a bit of hatred toward mobian teens for teasing him and his sister for being Vexian trash. He loves music and has 4 types of saxophones. He loves playing in station square and giving people a show.

Theroy is a thunder user like Thunder Punch but cant control it fully. He also has some ability to manipulate chaos and monster energy (but only a little bit). He is a master at using daggers to fight and his speed is outstanding and can only be outmatched by a few others.

History: When Theroy obtains lots of electrical energy his hair turns light blue as his fur turns to a cyan color. His speed increases and be becomes as fast as a laser. Blue Lightning Gear only lasts for a while and doesn't give him invulnerability. In this form his dagger becomes a sword which can cut through almost anything. 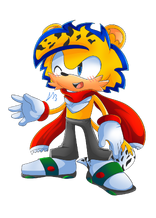 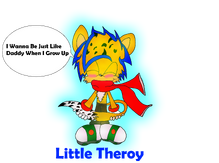 Add a photo to this gallery
Retrieved from "https://vexian-encyclopedia.fandom.com/wiki/Younger_Theroy_the_Mongoose/Leopard?oldid=4190"
Community content is available under CC-BY-SA unless otherwise noted.